How many times did you eat meat last week? Do you chose to sometimes leave out meat, because you don’t really miss it or perhaps it’s too expensive? Perhaps you have heard talk about meat being bad for the environment, but not really sure why that is? Listen up then, here is all you need to know about Meatless Mondays:

1. WHO CAME UP WITH MEATLESS MONDAYS?

​The idea of having Meatless Mondays derives from WW1, where U.S. Food administration encouraged families to cut down on meat and wheat, so that there would be more food ratios for the soldiers.  13 mio. families signed a pledge to perform “Meatless Tuesdays”. The campaign ran again in WW2, this time as “Meatless Mondays” and also afterwards, when there was food shortage after the war. In 2003 “Meatless Mondays” was revived by Sid Learner and Johns Hopkins School of Public Health’s Center for a Livable future, to raise public awareness to people’s health and the planet.

2. WHY IS MEAT BAD FOR OUR HEALTH?

Meat consumption has grown by 20% globally in the past 10 years. Research has shown that too much consumption of red and processed meat can increase the risk of some cancers, like colorectal cancer and that a plant based diet can help diabetes. Research also shows, that replacing meat with vegetables and plant-based protein such as bean and peas, means a smaller intake of fat and higher intake of fibre, protein, folate, zink, iron and magnesium. It has furthermore been tested, that vegetables, fruit and whole grains can protect against cardiovascular disease. And lastly, studies show that people on plant based diets generally have lower BMI and it can thus be argued that cutting out meat can reduce obesity.

3. WHY IS MEAT BAD FOR CLIMATE CHANGE?

UN’s Food and Agriculture Organization estimate that the meat industry is responsible for nearly 1 out of 5 man-made green house gas emissions – this is more than the all house gas emissions caused by the transport sector. Earth Day uses these comparisons:

4. WHY IS MEAT BAD FOR OUR USE OF RESOURCES?

To produce meat you need a lot of water and it’s estimated that 7-10.000 litres of water go into the production of 500 g. of beef. In comparison, producing the same amount of tofu would require only 800 litres, and vegetables, about 150 litres. Also, the livestock industry use about 50% of the corn produced to feed animals and the amount of fossil fuel used to produce meat, is about 10 times as much as when producing a grain based product.

5. HOW MUCH MONEY CAN YOU SAVE BY NOT EATING MEAT?

Healthcare costs related to obesity as well as heart diseases, strokes, cancer and diabetes account for 75% of costs in the United States, so savings can be made for the public sector, but also personally if you’re on private healthcare. Whether you save money on your weekly budget, is of course dependent on where you live and what meat and vegetable you generally buy. But of course, common sense will tell you that if you do not buy e.g. a beef steak, the money saved can get you a lot of grains and vegetables.

6. WHAT CAN I COOK INSTEAD OF MEAT?

Tofu is common known substitute, but vegetarian and vegan recipes are now easy to come by in recipe books and online. Also watch out for our Meatless Monday dish here at Orgayana – how about this:  Long beans and bean sprouts salad

7. WHAT IS FAKE MEAT AND CAN I EAT THIS ON A MONDAY?

Fake meat is typically soy/vegetable/lentil based patties, but a term that is evolving rapidly as new products are coming out that resemble meat on a whole new level. Until now, “fake meat” bought in the freezer counter has often has a reputation of being less healthy than your homemade alternative, as salt and fats have often been added, making it a less healthy option. But, answer is yes.

8. WHERE CAN I EAT OUT FOR MEATLESS MONDAYS?

Many restaurants have vegetarian options on their menu and there’s also about 700 vegetarian or vegan restaurants listed in Singapore, so you should be spoiled for choice! Look at our Market Place or take this short cut!

9. CAN YOU FIND MEATLESS MONDAYS CAMPAIGNS IN SINGAPORE?

According to Agri-Food and Veterinary Authority, Singaporeans had an average meat intake of 105 kg in 2011, quite a chunk compared to the global average of 41,3 kg. However, recent initiatives are trying to change this. Khoo Teck Puat Hospital and Yale-NUS college have started promoting meat-free initiatives and the charity and eduction foundation, Kampung Senang have launched Green and Healthy Monday. Many schools have also take up the pledge, and the growing event, EarthFest Singapore and many more are also campaigning for Meatless Monday.

10. CAN I DO A CAMPAIGN FOR MEATLESS MONDAYS?

Anyone can do a campaign, whether you are working at a school, hospital or other workplace, and if you need campaign material, you can find it right here

See more about the history of Meatless Monday here 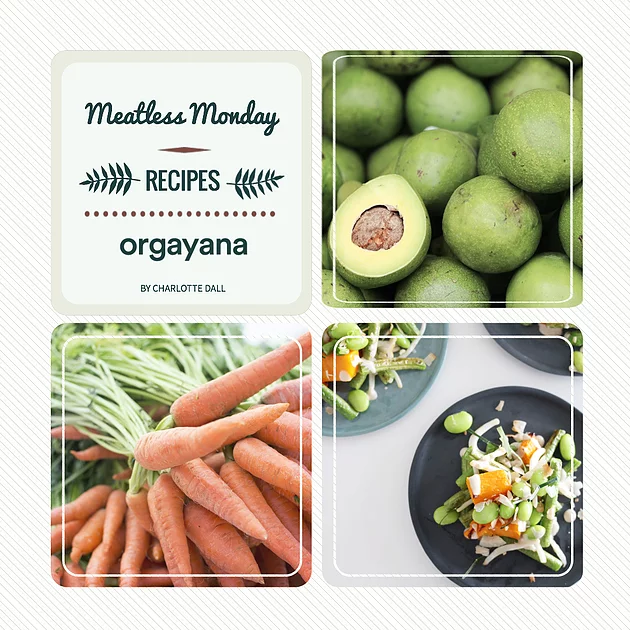 Mathilde is the founder and editor of orgayana, and is a passionate health and sustainability junkie, who created this green lifestyle platform with the purpose of guiding people to understand how we can help our planet by putting ourselves first. She's a journalist but also certified in Nutrition and Ayurveda as well as a Certified Green School Green Educator, ICI Neuro Coach, and Aligned Yoga Teacher.

Subscribe up to our newsletter and get healthy kids lunch box and party food recipes from Karin G. Reiter
& Clara Luboff's for free! The extensive ebook 'The Rosy Cheeked Kids" can be yours - just sign up here:

It’s been repeated many times, that the best way

It’s getting colder in the northern hemisphere -

🦟🦗🐜🐞🕷Many kids are fascinated with

With all this time spent in our homes - what a bet